Now, assume that we want to draw a line graph to depict the population variation between the given villages. We have shown the line graph here in two of the possible ways (I and II). Which of these depicts the variation more accurately? 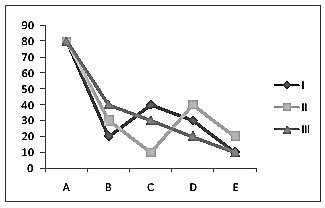 Check Answer
Next Question
Answer: Option A
: A

Here the approach should be to eliminate the wrong answers. This way we will be able tom save time. Let’s analyze curve II: This shows min population for Village C, whereas the minimum is for E. Thus not possible. Curve III: In reality Village C has higher population than Village B. But this curve shows the reverse. Thus not possible. Curve I: It shows no deviation from the expected. Thus the answer.

More Questions on This Topic :

Q.   A Belt Conveyor Used For The Transportation Of Materials Can....

Q.   Which Branch Has The Lowest Average Profit?

Q.   Refractoriness Under Load (RUL) Of Fireclay Bricks (under A ....

Q.   The Co-operative Bank Is Governed By The Banking Regulation ....

Q.   Arrange The Following Gases In Ascending Order Of Their Perc....

Q.   A Person Who Is Very Fond Of Sensuous Enjoyments

Q.   Price Of A Product Is Determined In A Free Market By

Q.   Queries To A Database

Q.   The Current Trend, Of Computer Usage Is Mainly Interactive; ....

Q.   Can You Name The Various Breeds Of Sheep Bred In India And W....

Q.   Selenium Rectifier Can Be Operated At Temperatures As High A....